What is the Senedd (Welsh Parliament)?

The next election takes place 6th May 2021

Following the election of Tony Blair’s Labour government in 1997, a referendum was held in Wales over whether there was support for the establishment of a national assembly. Although a referendum had previously been held in 1979 it had been defeated, but this time a majority voted in favour. As a result the Government of Wales Act 1998 saw the creation of the Welsh Assembly.

The Senedd (Welsh Parliament – formerly known as the Welsh Assembly) is based in Cardiff Bay, and has power in a number of devolved areas, most notably health, education, housing, and transport. It is made up of 60 Members of the Senedd (scroll down for more info on elections), some of whom belong to the Welsh Government.

The Welsh Government is elected by the people of Wales to “carry out a programme of government”, this involves developing and implementing policies and laws for Wales. MS’ who do not belong to the Government will scrutinise their work and may put forward their own policies. All MS’ also have a responsibility for representing their constituents (you).

What is the Welsh Parliament responsible for?

In recent years more tax raising powers have been devolved to the Welsh Government, including income tax, land transaction tax, and landfills disposals tax. The Welsh Government is also exploring what further taxes it might implement with its new powers.

Video: How are Members of the Senedd Elected?
(Source: Welsh Parliament/Senedd)
Current Make Up of the Senedd 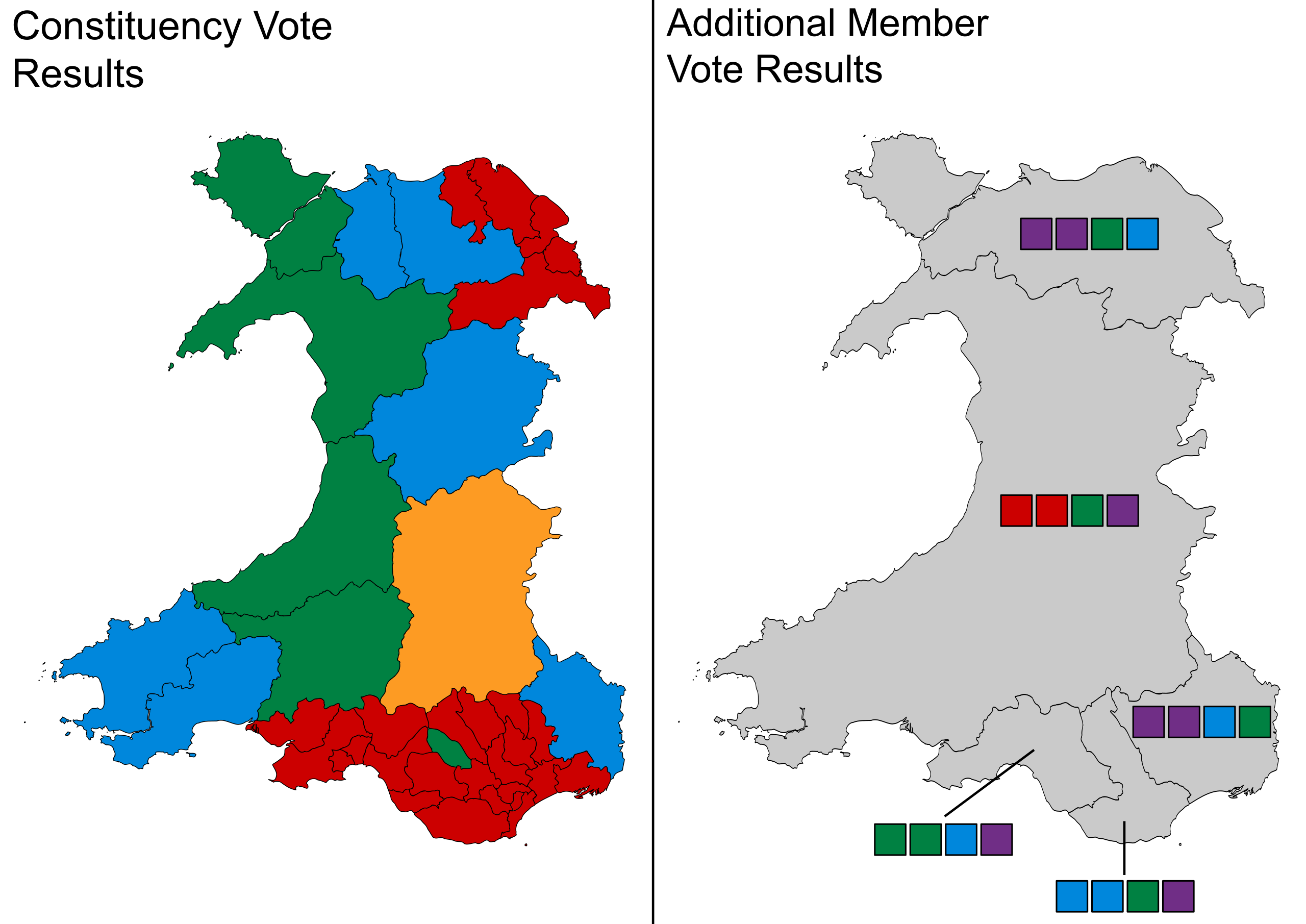 The way the Welsh Parliament is elected is a little more complicated than in the rest of the UK. The Parliament has 60 elected Members of the Senedd (MS).  Elections take place every four years and each registered voter has two votes.

In the election, eligible voters are given two votes – one to elect your constituency MS, and the other to determine who will represent your larger region.

To vote in the Senedd election, you must be:

If you won’t be able to make it to the polling station, you can apply for a postal vote.

What are Members of the Senedd (MSs)?

Did you find this page helpful?

If this page helped you understand more about elections, or encouraged you to vote, please do let us know.
Share

2021 ElectionsMay 6, 2021
60 days to go.
Register To Vote
If you want to vote, you must be registered. You can now register to vote online, its very quick and easy to do. You just need to know your name, address and your national insurance number. www.gov.uk/register-to-vote
Suggested Posts

What are Select Committees?

What is the Senedd (Welsh Parliament)?

Fight for the vote: the 1819 Peterloo Massacre

We use cookies on our website to give you the most relevant experience by remembering your preferences and repeat visits. By clicking “Accept”, you consent to the use of ALL the cookies.
Cookie settingsACCEPT
Manage consent

This website uses cookies to improve your experience while you navigate through the website. Out of these, the cookies that are categorized as necessary are stored on your browser as they are essential for the working of basic functionalities of the website. We also use third-party cookies that help us analyze and understand how you use this website. These cookies will be stored in your browser only with your consent. You also have the option to opt-out of these cookies. But opting out of some of these cookies may affect your browsing experience.
Necessary Always Enabled

Performance cookies are used to understand and analyze the key performance indexes of the website which helps in delivering a better user experience for the visitors.

Analytical cookies are used to understand how visitors interact with the website. These cookies help provide information on metrics the number of visitors, bounce rate, traffic source, etc.

Advertisement cookies are used to provide visitors with relevant ads and marketing campaigns. These cookies track visitors across websites and collect information to provide customized ads.

Other uncategorized cookies are those that are being analyzed and have not been classified into a category as yet.

Other uncategorized cookies are those that are being analyzed and have not been classified into a category as yet.

SAVE & ACCEPT
Powered by